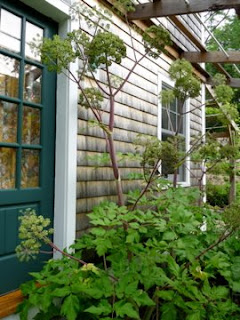 
Angelica is a striking addition to the garden growing to 3.3 ft the first year and 8.25 ft the year when it blooms. The blossoms look like fireworks! It is considered a biennial/perennial. The first year it produces leaves, the second year blossoms. The whole plant is used in herbal medicine.

Angelica, which is related to carrots, dill and fennel, contains chemicals which have been shown to be effective against various bacteria, fungal infections and viral infections according to Wikipedia. Chewing on angelica or drinking tea brewed from it may heighten the immune system. Parts used stems, seeds, and root.

Harvest the leaves before the plant flowers. Angelica tea can be made by adding one cup of boiling water to one teaspoon of dried angelica root or 3 teaspoons of crushed fresh leaves. Steep for at least 10 minutes. The seeds can be used as a substitute for juniper berries.

Pregnant women should not use angelica. People consuming angelica should avoid excess sun exposure since angelica can increase the sensitivity of skin to sunlight.

The seed heads can be used in dried arrangements.

A limited number of seedlings available in pots @ $4. For pick up only. No shipping.
Posted by Annisquam Herb Farm at 13.6.11