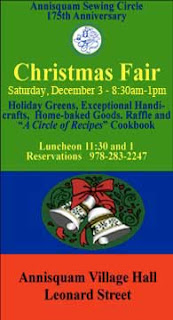 A delicious three-course luncheon featuring chicken tetrazzini, will be served at two seatings: 11:30 am and 1:00pm for $15 per person. Reservations are recommended by calling 978-283-2247.

All proceeds from the Christmas Fair are contributed by the Sewing Circle to Cape Ann community programs.
Posted by Annisquam Herb Farm at 9.11.11