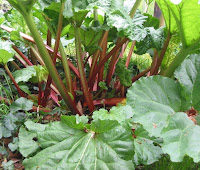 Last fall composted manure was added on and around the rhubarb plants, rheum rhabarbarum. Mulch was added on top to keep the winter winds from drying out the soil and to limit soil temperature fluctuation. Early in the spring the mulch was gently pulled back and left in a ring around the plants that were just barely emerging.

The rhubarb is noticeably taller each day now. A pie in a week or two, perhaps? Some of the extra will be shared with family and friends. Some will be made into a sauce for toast, cereal, ice cream and yogurt. If you want a recipe using rhubarb click here and scroll down!

Rhubarb leaves contain poisonous substances, including oxalic acid. A spray can be made from boiled rhubarb leaves to prevent blackspot on roses and use to control aphids.

To make the spray
The remaining leaves are used as mulch around the plants or put in the compost pile.
Posted by Annisquam Herb Farm at 9.5.09