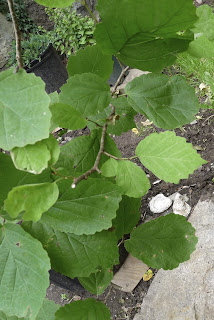 We have two witch hazel plants in the 'nursery' which will go into the garden as soon as they have recuperated from the transplanting. The bark and leaves of witch hazel are high in tannins which provides the astringent properties. Make your own fresh tisane or tincture or . . .
Witch Hazel Lotion

Prune witch hazel branches in the late fall or winter, and shave off the bark with a sharp knife. Cut into smallish chunks with a knife or scissors, and place in a blender with enough vodka to cover the bark and blades of the blender. Chop as fine as possible, and transfer to a glass jar. Shake the mixture vigorously once a day and strain after five to six weeks. Combine 1 ounce of the witch hazel preparation with 1/2 ounce aloe vera gel and 1/2 ounce vitamin E oil, then bottle.

Forked twigs of Witch Hazel are used as divining rods. An extract of the plant is used in the astringent witch hazel. The bark and leaves were used by native Americans in the treatment of external inflammations. Pond's Extract was a popular distillation of the bark in dilute alcohol.

The original formulation of Pond’s Cold Cream was developed by T.T. Pond in 1846 using a witch hazel extract. Pond learned about the extract from Native Americans living around New York.