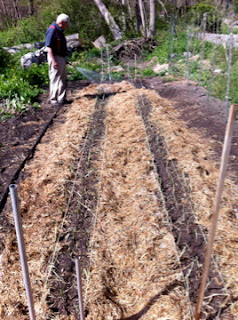 Each year we try a new vegetable. This year it is Alisa Craig* onions from Johnny's Selected Seeds.

A friend in Maine who has a farm stand says he could not keep up with the demand for this onion.


Planted 3 across they are beside the Copra which we have grown with success in years past. Copra is a good winter storage onion altho' we seem to eat them too fast to know how long they hold in storage!

Mulch will be very important this year. We have had very little precipitation since last fall. Newspapers are dampened and placed in overlaying layers then hay over the papers. Some rows will have cardboard with hay or leaves over it. Both methods work well here.

I have been asked about sow bugs and slugs. In the first years they were both a problem. During fallow times we add seaweed, marsh grass and green kitchen waste to improve the soil. The plants are not bothered as much now. When you compost think "If is came out or the ground it can go back in the groumd." No fins, fur or feathers is another way to remember what to compost. Yes, some use fish but if you have skunks, raccoons and other wild life you might not want to Encourage them to dig in your garden.

According to Seed Savers Ailsa Craig (Allium cepa) is named after Ailsa, a small round island off the coast of Scotland that is solid rock. Introduced in 1887 by David Murray, gardener for the Marquis of Ailsa.

* From Wikipedia - Ailsa Craig (Scottish Gaelic: Creag Ealasaid) is an island of 219.69 acres in the outer Firth of Clyde, Scotland where blue hone granite was quarried to make curling stones. "Ailsa" is pronounced "ale-sa", with the first syllable stressed. The now uninhabited island is formed from the volcanic plug of an extinct volcano.
Posted by Annisquam Herb Farm at 21.4.12