Our ash trees along with many others here on Cape Ann are dropping their leaves at an alarming rate.

I contacted Deb Lambert at Corliss in Ipswich and sent along some photos of the leaves.

This year the leaves are dropping from the ash at an alarming rate. We have several ash trees looking very poorly. Last year our arborist told us there was no answer to the plight of the ash and to feed them. Are there any updates on how to combat what is happening to them?

Here is her reply to my question.


Anthracnose - We're seeing anthracnose on many trees this season, because of the cool, wet period we experienced recently.  Nothing to do for this right now, except to collect and destroy fallen foliage, since the spores are spread by wind and splashing rain.  Do not allow fallen leaves to remain at the final leaf drop in autumn - keep raking.  Prune out any dead or dying branches to further lessen sources of reinfection.  The same fungicides and timing, as listed below for ash rust, will help prevent this next year.  If the spring is especially cool and wet, applications need to be extended later into the season.  An early spring fertilization with Tree-tone will help improve vigor.  Alternatively, feed in October - the stored energy results in improvement next spring. 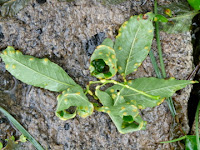 Ash rust (Puccina sparangioides), at this stage, is producing fruiting structures( little whiskery pustules) on the undersides of foliage.  For the rest of the summer, spores will continue to be released.  This is an alternate host disease, so from the infected ash leaves, spores are carried on the wind to adjacent cordgrass and marsh grass.  As they land on the wet grass foliage, the rust spores produce blistered fruiting structures here, as well.  From July on, spores from the ash foliage continually reinfect the grasses.  Before winter, the final phase produces resting spores on the grass, which carry over until spring, when they seek out ash foliage as the alternate host. 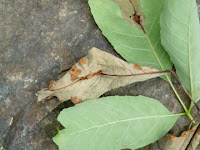 Damage is not just to foliage, but extends to petioles which become bent and twigs that exhibit galls and cankers.  Foliage often browns and drops prematurely.  Because the disease, though disfiguring, is not a serious, immediate threat, the phrase "no control needed on established trees" is often encountered.  However, the long-term implications of repeated infection may weaken the tree.  An ash, thusly stressed, will be more prone to storm damage and more susceptible to the invasion of other disease organisms.

Once infected, as your leaves are, there is no control.  Keep infected foliage picked up - burn or discard… do not compost.  Spring applications of a fungicide, as foliage buds break and at regular intervals throughout foliage expansion, is the best preventative and is particularly important during a wet spring.  Mancozeb or chlorothalonil (Daconil) are the recommended fungicides for Ash rust.  These are available to home gardeners.  Certified arborists will have access to other effective fungicides and a large tree may necessitate calling in a professional to accomplish preventative applications.  Follow the previous recommendation on early spring or fall fertilization, outlined under anthracnose.

As with so many pests and diseases, early intervention is crucial.  By the time we notice foliage impacted and devastated by such diseases as apple cedar rust, peach leaf curl or black spot, it's a bit late to talk about control.  The best we can hope for, in many cases, is preventing the disease from moving onto newly emerging foliage (as with black spot on roses).  Picking up and destroying fallen leaves, right through autumn leaf drop, is important.  Sometimes, going back to the rose example, we also employ fungicides to prevent the disease from infecting continually unfurling new leaves.  Depending on the disease in question, we often follow spray schedules that may include fungicide applications at leaf drop, and during the fall and/or late winter dormant season.  Remaining proactive and taking preventative steps is essential.

A huge Thank You to Deb for her help!
I have been on my hands and knees plucking leaves out of the garden beds. We have two large ash beside the house and greenhouse, another large ash in the center of the drive turn-around, plus several more close by. The ground is covered with leaves!