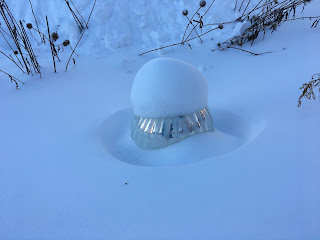 No measurable snow until February...

Then we had more than twelve inches on the greenhouse that had to be helped off with a second storm a few days later leaving 10 inches more. And now, a week later, the temperature is forecast to go to 50 degrees.

The rosemary is blooming inside the greenhouse. The two fig plants look well. There are many pots with the trees from the Arbor Day Foundation that arrived, bare root in the fall. And an artichoke under a cover of mulch that was new in 2016. When the sun is shining it is wonderful in the greenhouse, warm and moist.
Posted by Annisquam Herb Farm at 18.2.17