The kitchen smells wonderful as the bread is baking!

If early man could make bread we should be able to do it easily with all the equipment and facilities we have at our disposal.

An early memory to making and cooking bread was at summer at camp. We took a pre-made biscuit mix. Added water and stirred together. Molded the mixture around a green stick. Cooked it over an open fire until done. Once it was off the stick, we put jam in the hole. Pretty basic and possibly messy.

I grew up in the era of Wonder Bread Builds Bodies 12 Ways. A sandwich created during breakfast with mayonnaise, lettuce and tomato was pretty soggy by lunch time.
https://www.mediapost.com/publications/article/125104/wonder-bread-still-says-it-builds-healthy-bodies.html

We had homemade bread once in a while. The kitchen took on a special character when the aroma rose from the oven. It was traditional to cut off an end as soon as the bread came out of the oven and slather it with butter as a special treat. 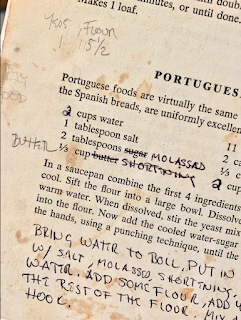 Years past... After I was married I started to bake bread, experimenting with different ingredient. My go to book was and is A World of Bread by Dolores Casella, published in 1966. As you can see, it has been well used, this page has been edited several times! I just looked it up online. Amazon has a paperback copy of the 1977 version for $987.25! There are other sites that carry used books to search for the book, if you are interested in adding it to your collection.

Now back to how easy it really is to create your own bread. You may have received a recipe form a friend or relative that says a pinch of this, a dash of that. Well this recipe goes even further down the road of estimating the measurements.

Now if that sounds to loosey-goosey for you there are lots of recipes online and in traditional cookbooks to try. Do not be held back by the lack of a particular ingredient. If you do not have yeast, try making a starter! Leave out the cornmeal. Use sugar instead of molasses. Create your own recipe!

Baking your own bread and sharing it with family and friends is a simple and rewarding pleasure. It can brighten any day.